Odysseus Dreaming is the story of the Greek hero Odysseus, hero of the Iliad and the Odyssey, epics that are the foundation stones of Western literature. It is based on texts by Homer, Hesiod, Virgil, Dante and Tennyson. Yet Odysseus Dreaming it is not just those great tales, for Odysseus always seeks one more adventure. What is his destiny? This is the tale of tales, the ultimate story.

Odysseus Dreaming is a very big story. It is suitable for adults and ‘young adults.’

There are few in the land with the skills, the knowledge of literature and legend, to create and perform such a demanding work. In Odysseus Dreaming Mike O’Connor and Barbara Griggs have created a masterpiece of eloquence and melody.

Mike is a nationally respected storyteller with a deep knowledge of folklore and mesmerising word skills. Past works include Return to Lyonesse, Imravoe, Tristan and Iseult, Loki, Tales of the Holy Rood, and Of Gods and Men, the 2009 Festival at the Edge solo commission.  A Bard of Gorsedh Kernow he has been honoured for research of early Cornish music and is well-known for his work for TV’s Poldark.

Barbara is a skilled and sensitive musician; her principal instruments are the harp and viol. Herself a fine storyteller, Barbara has a deep understanding of storytelling and wrote most of the music for Odysseus Dreaming. Her music has been described as having ‘breathtaking beauty’. Here it is exquisitely dovetailed into the performance, and the subtle integration of words and music has won high praise.

Mike has crafted the tale. Barbara and Mike have added music in a formula that is accessible and dynamic and has attracted sell-out audiences at literary and storytelling festivals.

The storytelling event of the year… A tour de force from one of Britain’s premier tellers, Mike O’Connor and Barbara Griggs who plays harp. Carl Merry

I was transfixed and transported to mythical lands where magic, desire, loss, love and redemption were played out in the beauty of story, music and song … an amazing experience. … The skills of the storyteller & harpist were truly marvellous … Unmissable. Susan Cooper 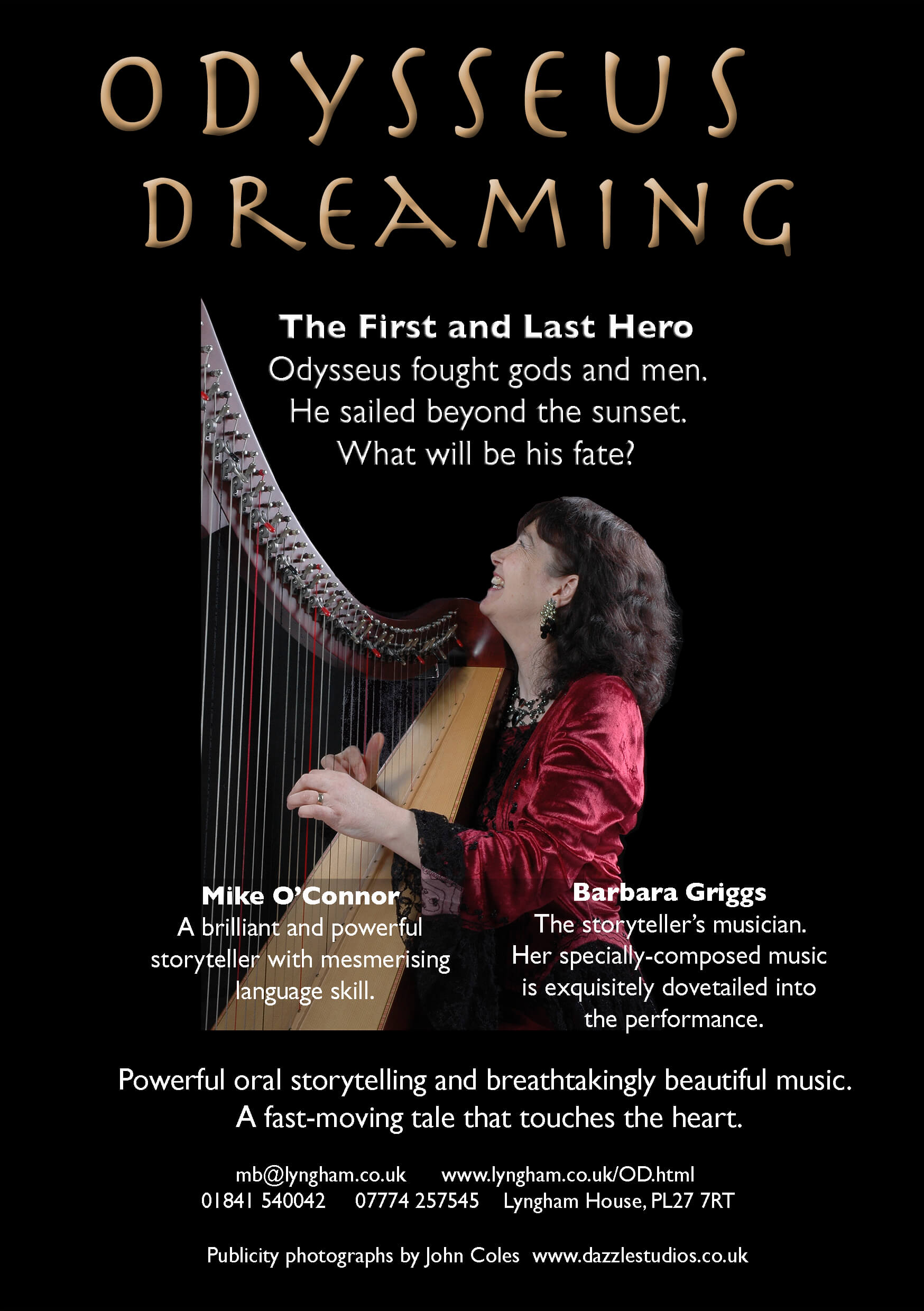