Sheelanagig + Support from The Odd Folk 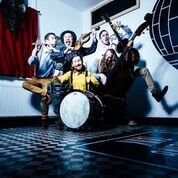 Sheelanagig for over a decade have brought their array of foot-stomping folk tunes to audiences across the globe. A quintet with a well-stocked armoury of stringed instruments – guitar, fiddle, double bass – added with the rhythmic energy of flute and drums and a bagful of joint-jumping tunes, these boys from the South-West
England create a real dynamic which is inherent in both their furious dance medleys as well as their interestingly arranged original pieces.

Putting the groove into a selection of traditional and original European Folk music dating from the medieval times to present day, it’s difficult – nay, impossible – for your limbs to remain stationary when you’re within earshot of them in full flight. The fact that they often play with a knowing wink shouldn’t obscure their
impeccable technique and outstanding musicianship that raises the roof in every place they play. In the last year they have toured France, Switzerland and Australia as well as busy summer festival season and an extensive UK tour. Catch them out on the road again in 2019, see website for tour dates.

‘The musicianship is tight and intense’ – Songlines

The Odd Folk are a collection of multi-instrumentalists who swap styles as often as they swap instruments. A “passionately ramshackle” quintet playing their own brand of “triumphant folk” while journeying up and down the country in a vintage Renault 4. Recently seen supporting young troubadour Johnny Flynn and folk legend Steve Tilston, and equally at home on the main stage or the corner of an old barn, the boys treat each giggle with the same gusto and aim to make people smile and bounce.

“The best folk band you’ve never heard of…” The Guardian

“Rootsy like the Chelsea Flower Show” folkradio
“An acoustic wonder, what rock might be if created in Cambridge rather than Chicago” fROOTS